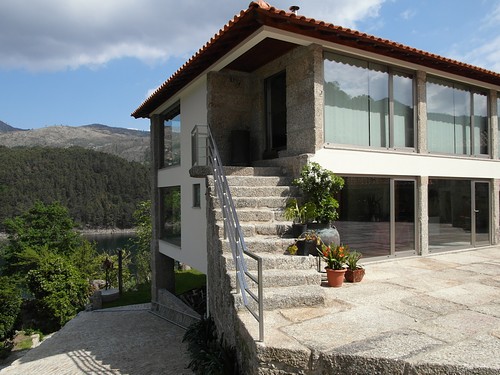 Quinta de Fundevila is situated on the edge of the village of Pandoses, its grounds bordering on the reservoir of Caniçada. Along a cobbled lane (about 150 metres) you walk down to a small private beach, where you can swim, laze away the day or take a canoe onto the lake.
At the quinta are 3 tastefully restored stone farmhouses:
– Fundevila I, called Casa do Penedo
– Fundevila II, called Casa da Eira
– Fundevila III, called Casa Mãe

Casa da Eira is named after the original stone threshing floor next to the house. Like in the other house, the old granite walls form a surprising contrast with the modern glass façade and the stairwell. This villa, which also sleeps 8 people, is the closest to the lake, therefore offering wonderful, uninterrupted views over the water and the hills beyond.
Outside the high season the villa can also be rented with 3 bedrooms (max. 6 people). In this case the 4th room remains closed.

Around the 3 houses is a large, well-kept garden with orange and lemon trees, and the pool and adjoining sun deck surrounded by a lawn. The rest of the grounds are still in their original state, small terraced fields sloping down to the lake.

The lake – 700 hectares – offers plenty of opportunities for watersports; you can hire canoes, jet skis and pedalos, and you can learn how to waterski.
Not far from Pandoses, at the “crossroads” of the reservoir, starts the national park Peneda-Gerês. You can find an information centre in the spa villages of Caldas do Gerês, where they provide information on flora and fauna of the park, archeological finds (among which the roman road that once lead from the city of Braga to Rome), walking routes, etc.

In the village of Parada de Bouro (2.5 km) are some small shops, cafés and a simple restaurant. There are more shops and supermarkets in nearby Vieira do Minho (8 km), and also banks, the post office, a health care center and a weekly market. The best restaurant is about 6 km away, in the historic pousada of Sta. Maria do Bouro.
The distance to Braga is about 30 km, and to Guimarães (Unesco World Heritage) 40 km. 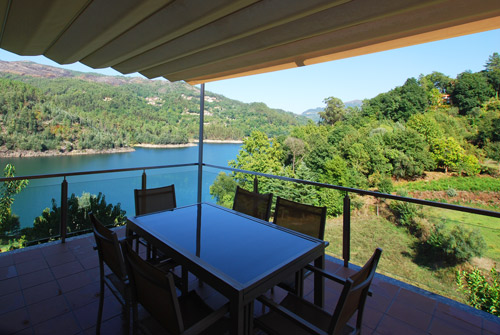