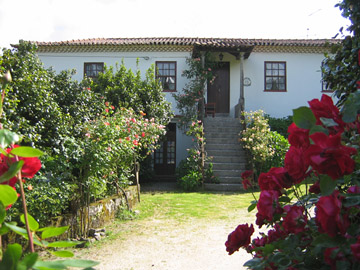 Ground floor: (all at the same level): Private entrance. Living/dining room. Well-equipped open kitchen. 2 Double bedrooms, one with en-suite bathroom and the other with an en-suite shower room. Patio and garden.
Heating: Central heating, with a wood-burning stove in the living room.
Amenities: TV, microwave oven, dishwasher, barbecue, cot (at request).

First floor: (all at the same level, with a few steps leading up to the kitchen): Private entrance. Living room. Large, fully fitted kitchen with dining area.
3 Bedrooms, the first a double with ensuite bathroom (bath, shower and bidet), the second a double and the third a twin. Shared bathroom, bath, shower and bidet. Patio and garden.
Heating: Central heating, with a wood-burning stove in the living room and an open fireplace in the kitchen.
Amenities: TV, microwave oven, barbecue, cot (at request).

The estate Casa da Cuqueira is located just South of the small town of Vieira do Minho. It is a fine example of a 19th century North Portuguese rural estate farm, consisting of a stately main house, several outbuildings and a stone gate with coat of arms.

In the main house, which is surrounded by a lush garden, are three apartments, named Camélia, Eira and Vinha. At the back you will find the swimming pool with a large lawn and playing field. The owners, an elderly couple, also have their living quarters in the main house.

Camélia is on the ground floor at the front. This nice and comfortably furnished apartment for 2 people has everything you need for an enjoyable stay, including a private part of the garden.

Eira, named after the adjoining, authentic threshing floor, is situated at the back. This comfortable apartment has been furbished in a tasteful combination of antique and modern, and is suitable for 4 people.

Vinha is also situated at the back, above Eira. This particularly large and tastefully furbished apartment houses 6 people. Like Eira, Vinha has its own outside space, a patio on the former stone threshing floor and a part of the garden where fig trees grow.

For reasons of privacy and peace Eira and Vinha are not let out independently, however they can be rented at the same time by a group of 10 people.

The distance to the centre of Vieira do Minho is about 1 km. There are all kinds of shops, restaurants, cafés, banks, the post office, etc. Also closeby is the reservoir of Ermal, where you will find beaches, nice places to swim and a facility for cable-waterskiing called Tele-Ski.
More possibilities for watersports are to be found at the large reservoir of Caniçada (12 kms), situated at the foot of the national park Peneda-Gerês. There are canoes, jet skis, pedal boats and motor boats for rent and you can also (learn to) waterski.
The distance to Guimarães (Unesco World Heritage) and Braga is 35 km. 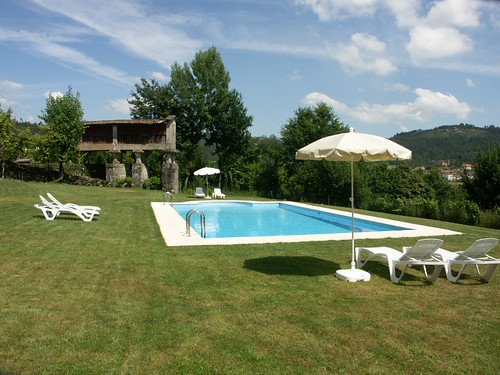